Making my own pizza dough has been on the to-do list for too long.  It became a higher priority after our recent visit with Karen and Jim, and we enjoyed awesome homemade pizza baked in their neighbors’ outdoor pizza oven.  Nice!  A family dinner on the calendar provided the perfect opportunity for our own pizza party.  I had bookmarked a recipe for pizza dough from Annie’s Eats months ago and noted several of Annie’s hints for success.  First, don’t be tempted to substitute all-purpose flour for bread flour.  Bread flour’s high-gluten content gives pizza crust its structure and satisfying chewy crunch.  Second, weigh the flour for best results.  You also might want to take a moment to read Annie’s tutorial about making pizza dough.  It really helped me work through the process with confidence.

King Arthur Unbleached Bread Flour was a must-have for the experiment.  If you have read our site for very long, you know our affinity for King Arthur products and their employee-owned corporate culture.  It’s been very exciting to hear that some of you have switched to King Arthur flours in your own kitchens! 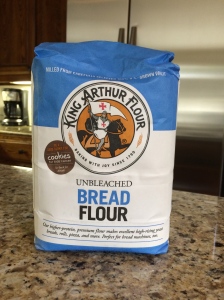 Measure the warm water into a 2-cup liquid measuring cup.  Sprinkle in the yeast and let stand until the yeast dissolves and swells, about 5 minutes.  Add the room temperature water and oil and stir to combine.

Place the flour and salt in the bowl of a stand mixer fitted with the paddle attachment. Briefly combine the dry ingredients at low speed.  Slowly add the liquid ingredients and continue to mix at low speed until a cohesive mass forms.  Stop the mixer and replace the paddle with the dough hook.  Knead until the dough is smooth and elastic, about 5 minutes. Form the dough into a ball, put it in a deep oiled bowl, and cover with plastic wrap.  Let rise until doubled in size, about 1 ½ to 2 hours.  Press the dough to deflate it.

To bake, place a pizza stone in the lower third of the oven.  Heat the oven to 500° for at least 30 minutes.  Turn the dough out onto a lightly floured work surface.  Divide the dough into two equal pieces.  Form both pieces of dough into smooth, round balls and cover with a damp cloth.  Let the dough relax for at least 10 minutes but no more than 30 minutes.

Working with one piece of dough and keeping the other covered, shape the dough and transfer to a pizza peel or round of parchment dusted with semolina or cornmeal.  Brush the edges of the crust with olive oil.  Top as desired.  Slide the dough onto the pizza stone.  Bake until the crust edges brown and cheese is golden brown in spots, about 8 to 12 minutes.  Repeat with remaining ball of dough or freeze for later use.

Because I was making multiple pizzas for dinner, I doubled the recipe, then par-baked three crusts about 5 minutes before adding the toppings.  I froze one portion of dough for another time.  We had a marinara-pepperoni-sausage-cheese pizza for the traditionalists, an alfredo-mozzarella-romano pizza for the cheese lovers, but the star of the buffet was the recreation of an unusual pie we had enjoyed at an upscale pizza restaurant in the Dallas area.  It was super-easy and mega-delicious.

Bake for 5-6 minutes at 500°.  After removing from the oven, top with fresh arugula and drizzle with balsamic glaze.  I used glaze I had purchased, although you could certainly make your own.

The result?  The crust was perfectly crisp and chewy.  The sweet fig preserves were balanced with the tangy goat cheese, while the salty prosciutto paired fantastically with the sweet balsamic glaze.  It was a smashing success, to be repeated often! 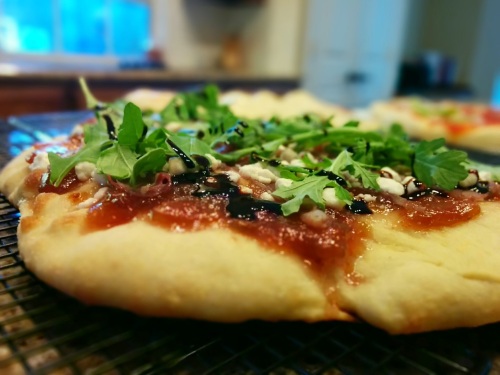