I didn’t have to think twice about picking up this Pecan Praline Topping.  I’ve loved pecans and pretty much anything made with pecans for as long as I remember.  My siblings and I spent many Sunday afternoons picking up pecans in my grandparents’ backyard.  My granddad would shell some of the pecans and toast them in a skillet with butter and salt.  Yummy!  Fast forward to the next generation, and my son was spending Sunday afternoons picking up pecans in my parents’ backyard.  Not only did he help with the harvest, he was also my dad’s assistant in keeping squirrels at bay.  Their efforts included strategically positioning fake rattlesnakes around the yard!  Effective?  Maybe.  Picturesque?  Not so much. 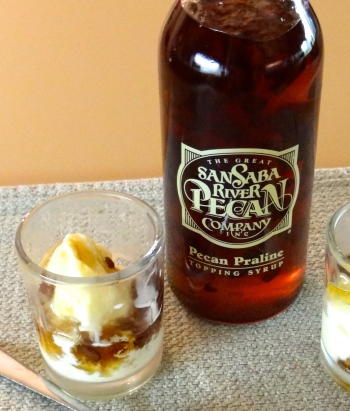 I’m not sure what measures The Great San Saba River Pecan Company takes to ward off critters from their 10,000 tree orchard in the Central Texas Hill Country.  That many trees could require several dens of fake rattlesnakes!  The company’s processing facilities are in the orchard, and they do so much more than grown, harvest, shell, and package pecans.  They also offer a gourmet line of pecan products, including their award-winning pecan pie, and peach, pecan & amaretto preserves.  You can pick your own pecans in GSSRPC’s orchard from November to January, and they offer free samples of their pecan goodies in their company store.

The Pecan Praline Topping is beautiful in the bottle, with pecan pieces suspended in the golden syrup, and it tastes even better than it looks.   The buttery sweet topping was the perfect complement to our Blue Bell Homemade Vanilla Ice Cream.  Allen pronounced it “really, really good”.  I think it would be stellar atop some pecan waffles or a warm slice of pound cake.  It might just make great addition to a sweet potato casserole, too.  I expect to be pulling it out of the pantry often.  Get your own bottle at The Great San Saba River Pecan Company’s website!